The United Nations Human Rights Council held in its thirty-fourth session a comprehensive review session of the human rights file in Egypt on November 13, 2019. In this session, 133 countries submitted no less than 385 recommendations, which are the recommendations that Egypt is obligated to comment on, whether by acceptance or rejection in March 2020. Egypt had received 300 recommendations at the previous comprehensive review session in November 2014, and agreed to 224 of them. Eleven independent human rights organizations, including the Egyptian Front, considered that the authorities had not fulfilled their pledges to implement these recommendations.

The Egyptian government, headed by Minister of Parliamentary Affairs Omar Marwan, emphasized during the comprehensive review session that Egypt has achieved a number of achievements in the framework of its efforts to improve human rights conditions, and this was demonstrated in the area of civil and political rights through the approval of a new constitution and holding presidential elections twice, and the election of the parliament under the supervision of the judiciary. In addition to amending the NGO Law and the Demonstration Law, and enacting a law to regulate building churches. In the area of ​​economic, social and cultural rights, the delegation emphasized an increase in the per capita annual income, a decrease in the unemployment rate and an increase in the pensions of civil servants, in addition to launching programs to protect poor families, orphans and people with special needs, in addition to efforts for providing adequate housing and comprehensive health insurance, in addition to criminalizing the smuggling of migrants and hosting of thousands of refugees and asylum seekers who are fleeing from conflict in their countries.

In contrast to the official government narrative, independent human rights organizations believe that the Egyptian authorities have amplified its violations of several human rights, foremost of which is the right to life, by carrying out executions issued by exceptional courts in cases in which fair trial guarantees have been breached. As well as violations of the right to physical integrity personal security through torture, enforced disappearance, prolonged pretrial detention, ill-treatment and medical negligence in places of detention, which are all practiced in a  systematic manner as policies conducted by the executive authorities in conjunction with the judiciary, which in turn has become an instrument of repression. In addition, the authorities expanded the practices of barring the rights to organize and peaceful assembly and freedom of opinion and expression, as they have arrested a large number of journalists, human rights defenders and political activists on account of exercising these rights and freedoms, not to mention the hundreds who were arrested on the backdrop of the demonstrations 20 September opposing the regime, while dozens of civil society workers are still prevented from traveling and their funds have been frozen pending case 173/2011 known as the “foreign funding” case.

Right before the UPR session in November 2019, chaired by the Tripartite Commission consisting of Fiji, Senegal and the United Kingdom, the Egyptian government submitted a report on its “achievements” in improving the human rights situation, while both independent organizations and stakeholders submitted an independent report that included a parallel view of these situations, in addition to a third report that included a compilation of information contained in the reports of treaty bodies and special procedures, reports of the Office of the High Commissioner for Human Rights and United Nations documents related to the human rights situation in Egypt.

By analyzing the 385 recommendations made by 133 countries that attended the UPR session in November 2019, the Egyptian front found that the recommendations addressed at least 47 topics in the field of promoting human rights conditions in Egypt, especially women’s rights, and those related to strengthening the role of International mechanisms, justice procedures, children’s rights, ending the death penalty, promoting freedom of opinion and expression, and terminating acts of torture and cruel treatment. 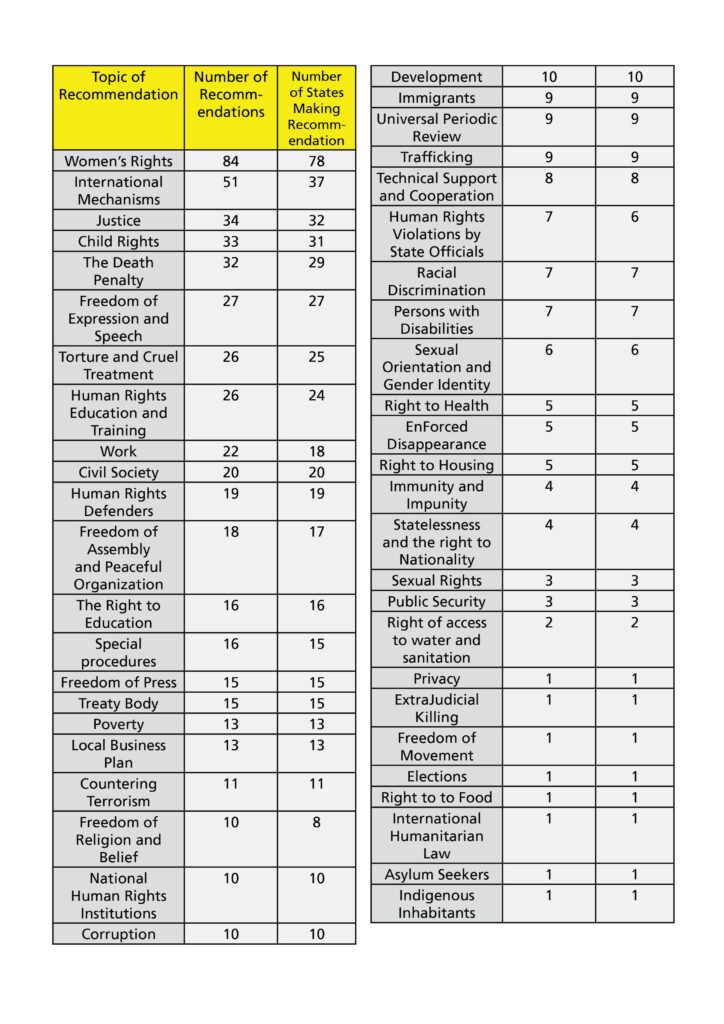