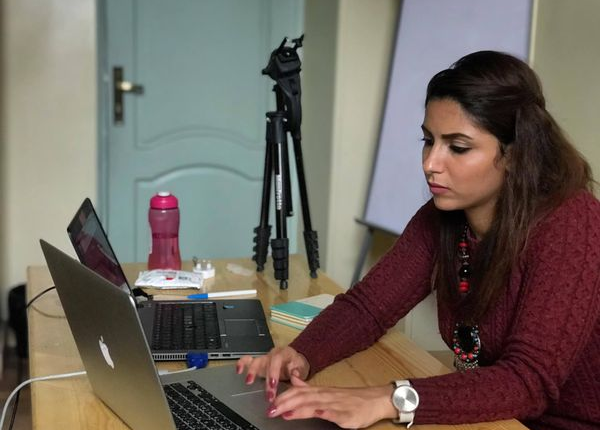 Journalist Solafa Magdy Mahfouz was beaten, threatened, and harassed as well as dragged along her detention facility in Al-Qanater prison by prison staff, according to lawyers who confirmed this to the Egyptian Front for Human Rights. In addition to complaints that accuse the prison warden, the chief of investigations, and other officers of committing and participating in these violations. This is based on her statement during the renewal session after fourteen months of her detention.

Solafa told the Judge heading the third circuit of terrorism, during the session renewing her detention on January 19, 2021, that on November 29, 2020, three prison wardens came to her cell and took her outside the ward, blindfolded her, and took her to a room where an anonymous person told her “I will you out of here if you listen to me, and I want you to answer all my questions.” Solafa confirmed that he wanted to recruit her to work with him as an informant. When Solafa refused, he threatened her not to see her son again, she also confirmed that this person harassed her, without describing the act of harassment.

Also in the same session, Solafa said that while she was being transferred from prison to attend the session, she was dragged inside the prison and assaulted, as well as being strip-searched, and that the prison guard forced her to take off all her clothes, including her underwear, while another one dragged her from the search-room to the deportation car. When her mother visited her eight days after this incident on January 27, she found her in a state of severe fatigue, as two female guards supported her from both sides so that she could move from her cell to the visitation room. She also told her mother that she suffered severe bleeding. It is worth noting that Qanater prison had previously conducted a forced examination on her uterus which she suffered bleeding because of, especially since she had undergone a uterine tumor removal operation before that.

In this context, lawyers submitted telegraphs to each of; the Attorney General, the Attorney General of the State Security Prosecution, the Attorney General of Bahna Prosecution, the Minister of Interior, the Director of Qalyubia Security, the Chief Warden of Qanater Prison, bearing numbers: 257789458- 257789459 – 257789460- 257789461- 257789462- 257789463 – 257789464. They demanded in the telegraphs that all these incidents be investigated and that all necessary legal measures be taken, to consider Solafa’s statements as a victim, and to include a copy of the minutes of her detention renewal session on January 19, 2021, in which her statements about these incidents are confirmed. They also demanded that Solafa be presented to the forensic medicine office and to prepare a report on her repeated injuries and uterine bleeding. In addition to accusing the warden of the Qanater Prison, the head of the prison investigation, and a number of other officials, for having committed positive and negative acts that included crimes of beating and assaulting others, and the use of cruelty and harassment, as well as facilitation of committing these crimes as mentioned by Solafa.