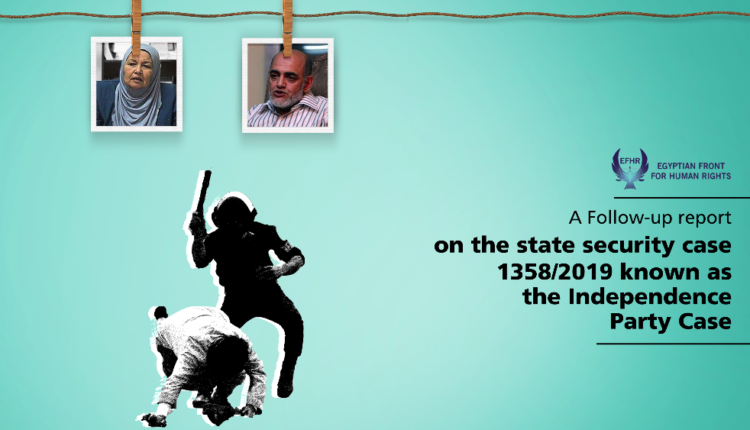 Egyptian Front published a report on violations of the rights in the State Security Case 1358/2019, which includes a number of activists from Independence party who have been subjected to a number of violations since their arrest such as enforced disappearance, cruel treatment, and detention In bad places.

The case started following the events of September 20, when a wave of protests demanding the departure of current president Abdel Fatah ElSisi, which was followed by a wide wave of arrests that included activists, lawyers, journalists, as well as citizens not involved in any political activities.  Following September 20, which witnessed several night demonstration in different places and governorates, the Independence Party issued a statement calling on the Egyptians to rally on Tuesday to demand the departure of Abdel Fattah El-Sisi, and that statement was followed by a change in the date to be Friday instead of Tuesday in Tahrir Square in order to unify The parties involved, and against the backdrop of that statement came a large wave of arrests of members and leaders of the Independence Party.

The arrests of many party members, most of them key leaders, started on September 23, 2019, when the party’s Secretary General Magdi Koror, and the Secretary General Commissioner Ahmed El Khouly and the party’s Secretary Mohamed Al Amir, as well as Sahar Ali, a member of the legal committee of the party, lawyer Sahar Ali, were arrested. And some members of the party’s executive committee, including Ibrahim Khedr, Ahmed Donia and Ahmed Al-Qazzaz. The arrest campaign also included Najlaa Qalioubi, wife of the party leader Magdi Ahmed Hussein, who has been detained since 2013, as well as the party’s secretary of organization in the Gharbia governorate Ihab Juha.

They began to appear consecutively before the prosecution on September 26, the security forces forcibly disappeared some of the accused, and illegally held them against the criminal procedure law. The party members now face a number of accusations, including joining a group founded in violation of the law, and spreading false news, while the prosecution kept the name of that group anonymous.

This report monitors the legal status and detention situation for 9 defendants detained on account of this case, that is in an attempt to shed light on the case and the  course of litigation it follows, while pointing out legal and humane violations that the defendants are subjected to.

To read the full report

Case aside: Egyptian authorities have developed new patterns of targeting activists and rights defenders in case no 173/2011, known as foreign funding case.