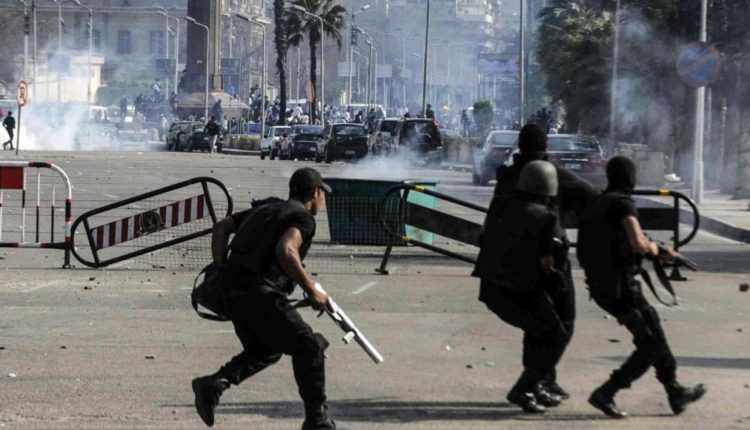 300 UN recommendations spurned by the Egyptian government; 12 demands must be urgently implemented before next month’s UPR

Egypt’s human rights situation is at its worst since 2014, as corroborated by a newly released report by Egyptian rights organizations ahead of Egypt’s imminent Universal Periodic Review (UPR), scheduled for the 13th of November. The government’s onward march in the exact opposite direction of that set forth by its previous UPR is made no more evident than by state security’s arbitrary detainment of at least 3000 persons following demonstrations in late September; marking Egypt’s most sweeping arrest campaign to date.[1]

Released on October 7th, the report[2] –a joint submission by the Egyptian Taskforce for Human Rights (comprising 11 rights organizations[3]) – details the dire state of human rights in Egypt over the last five years, since Egypt’s previous UPR in 2014. In a brazen repudiation of the nearly 300 pledges it made to the UN in its last UPR, the Egyptian government has increasingly inflicted severe violations upon its population, depriving citizens of everything from their right to life to their right to free movement. These violations are facilitated and codified by an onslaught of repressive legislation in conjunction with wide-reaching, extreme censorship and other assaults on freedom of expression, association, and other fundamental human rights. Amid this bleak national milieu, women and children, ethnic and religious minorities, and LGBTQ persons are acutely vulnerable.

As extensively documented by the report, the Egyptian state’s disdain for the right to life is evidenced by the frequency in which it deploys extrajudicial execution. For those processed through Egypt’s fundamentally flawed judicial system, the prospect of the state upholding their right to life is similarly bleak: the judiciary has issued and implemented an unprecedentedly high number of death sentences, depriving persons, -including children– of their right to life on an appallingly shoddy legal basis. When the Egyptian state is not formally enacting the death penalty, it is enacting it on a de-facto basis, through its alleged killing of prisoners by willful medical neglect, alongside endemic torture and inhumane prison conditions.

Medical neglect targets political opponents, as does state prosecution, harassment, intimidation, and reprisals; including enforced disappearance. The state’s arbitrary and politicized prosecution is typified by its arrest campaign targeting members of the Hope Coalition who were simply organizing- within legally sanctioned channels- to run in the coming legislative elections. And in the most recent arrest campaign following[4] the protests on September 27 and 28th,, human rights defender Mohamed al-Baker, executive director for Adalah Center for Rights and Freedoms, was arrested and subjected to degrading treatment, along with prominent pro-democracy activist Alaa Abdel Fattah.  Al-Baker’s interrogation sufficiently evidences that his arrest is a reprisal for his engagement with the UPR; questions during al-Baker’s interrogation focused on a report concerning violations of Nubian rights, which Adalah had submitted previously to the UPR.

State reprisals against independent rights organizations and defenders– including many of those involved in preparing the joint submission to the UN- are ongoing; in the past years, 31 rights defenders have been banned from travel, at least 10 organizations have had their assets confiscated, and over 37 human rights defenders have been interrogated. Alongside state prosecution and intimidation are the daily smear campaigns in state-aligned media, at times inciting to violence up to murder against rights defenders, some of whom are targeted for their cooperation with the UN. Like Mohamed al-Baker, human rights defender Mohamed Zaree faces reprisals for his work on Egypt’s previous UPR, and founder of the League for the Families of the Disappeared Ibrahim Metwally was forcibly disappeared by the Egyptian authorities on his way to attend a meeting of the UN Working Group on Enforced Disappearance.

The Egyptian government’s feverish crusade to eliminate political opponents– be it through depriving them of their lives or depriving them of their freedom of movement – is facilitated and bolstered by an ever-expanding stockpile of repressive legislation, most notably the recently passed constitutional amendments. Such repressive legislation is passed in an environment increasingly constricted by media censorship and other attacks on free speech, including the imprisonment of journalists and the deportation of foreign correspondents. In tandem, attacks against vulnerable communities have intensified, with the administration of President Abdel Fattah al-Sisi, since coming to power since 2013, overseeing the largest crackdown targeting the LGBTQ community.

With Egypt’s next UPR looming, 12 demands must be urgently implemented

The aforementioned demonstrations on September 26 and 27th were tantamount to a rejection of the Egyptian state’s policies; an eruption of widespread, long-stifled outrage at violations of civil, political, economic, and social human rights. November’s UPR constitutes what could be the final opportunity to reconsider Egyptian state policies, together with constituting a final appeal for victims long-

suffering under the amassment of injustices and human rights violations; inflicted upon them by the same government that is obliged by its own constitution and international law to uphold their rights.

The demands – encompassing legislative amendments ensuring judicial independence and protecting defendants’ rights – would address injustices against those held quasi-permanent pretrial detention, imprisoned or awaiting execution, as well as those persons and organizations afflicted by travel bans or asset freezes

who have been banned from travel, had their assets frozen, or have otherwise been unduly prosecuted and harassed by the Egyptian state.

The twelve demands can concurrently function as a reference for the international community insofar as they encapsulate the most significant demands that the Egyptian government should be pressured to cede to and implement.

The Egyptian Taskforce for Human Rights is confident that the same state that drafted constitutional amendments, ostensibly held a society-wide dialogue to discuss them, and organized a referendum on them within only two months is also capable of releasing prisoners of conscience and introducing a handful of statutory amendments before the UPR.

The 12 urgent demands of the Egyptian Taskforce for Human Rights are as follows:

1-The president must use his legal right under Article 470 of the Criminal Procedures Law to commute the death sentences given to 74 persons.[5] For those convicted persons whose cases have not been viewed by the president, and in general, Egypt must enact an immediate moratorium on executions for the remainder of the cases and for sentences that will be handed down by the courts in the future. This should be a step-by-step, comprehensive review of the current legislation that allows for the judiciary to excessively issue death sentences.

3- The Egyptian government must take all necessary measures to release all persons detained for exercising their right to freedom of opinion, expression, and peaceful assembly, and their right to participate in the public sphere, including those currently detained since September in connection with Case 1338 and Case 1356 of 2019. The organizations also urge the state to release public lists of those arrested or remanded in custody on issues related to freedom of opinion, expression, and association.

4- Reopen churches closed on security grounds and/or due to objections from local hardliners, which according to the latest estimates pertains to 18 churches, and provide all necessary protection for ritual practice and worship, in accordance with the law.

5-Remove the block on more than 513 websites, including the websites of local and international news organizations and human rights organizations.

6-Repeal articles 40 and 41 of Law 94 of 2015, which provide legal cover for incommunicado detention of up to 28 days. This provision contravenes Article 54 of Egypt’s constitution, which guarantees that arrested persons shall be informed of the reason for their arrest and have the right to contact an attorney.

7- Repeal Article 50 of the counterterrorism law, which provides for the establishment of special terrorism circuits in the criminal court system; suspend all such terrorism circuits and distribute cases currently pending before them to ordinary criminal circuits; and conduct retrials for all persons convicted in such circuits before courts with the proper geographic jurisdiction.

8- Repeal Law 13 of 2017, which gives the president the authority to select the heads of judicial bodies without regard for seniority; considering seniority during the selection process was the practice prior to the law.

10- Repeal the last paragraph in Article 143 of the Code of Criminal Procedure, which allows for defendants in crimes punishable by life imprisonment or death to be held in pretrial custody indefinitely, and restore the previous article that limited pretrial detention to two years.

In addition, Article 277 of the same law must be repealed; that provision gives courts discretionary authority to refuse to hear certain witnesses, which constitutes a grave violation of the rights to a defense and a fair trial.

Article 39 of Law 57 of 1959 on appeal procedures before the Court of Cassation must also be repealed. By permitting the Court of Cassation to address substantive issues on the first appeal, the provision not only undermines the right of defense, but it also involves the court in matters beyond its core function.[6]

[1] The Egyptian government authorities also blocked additional websites at during the protests, including BBC Arabic and Alhurra, and police randomly stopped and searched pedestrians in the streets, searches included phones and social media.

[2] The report was sent to the UN Human Rights Council in March, the deadline for submission of independent and governmental reports for the UPR. The English-language version came in at 5,800 words, nearly the maximum permitted by the UN. The Arabic version provided greater detail and additional examples of serious violations in recent years. It also examined the 243 recommendations accepted by the Egyptian government during its last UPR in 2014 – these recommendations the government has failed to honor.

[3] The Taskforce includes the Cairo Institute for Human Rights Studies (CIHRS), Nadeem Center, Committee for Justice (CFJ), Belady Center for Rights and Freedoms, Egyptian Commission for Rights and Freedoms (ECRF), Association for Freedom of Thought and Expression (AFTE), the Egyptian Front for Human Rights, Arab Network for Human Rights Information (ANHRI), and the Freedom Initiative. Two of the elevated members of the Taskforce have opted, due to security reasons, to remain anonymous. The Arab Penal Reform Organization (APRO) and The Alliance of Queer Egyptian Organizations (AQEO) contributed to the report but are not members of the Taskforce.

[4] Al-Baker was arrested on September 29th.

[5] Appended is a list of 74 people known to have been issued final death sentences and are currently awaiting execution; the intervention of the president is their last hope.

[6] On 2 September 2019, the “Sabt” (Saturday C) circuit refused to comply with the procedure prescribed by Article 39 of the law, stating that a substantive review of the case is not its function. The task of the Cassation Court, the court said, is to examine the subject-matter court’s proper application of the law and adherence to proper legal procedure.