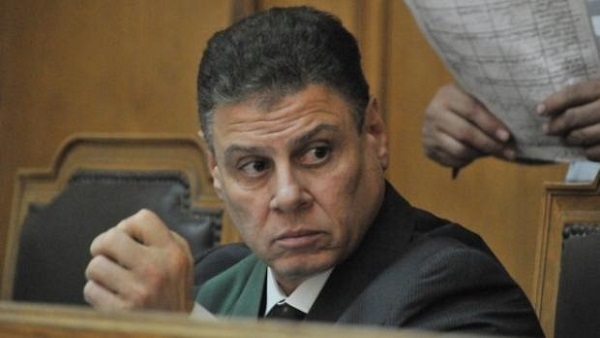 Egytian Front demands discharging judge Shereen Fahmy, considering him a political opponent rather than a judge as he is involved in the slow death of Mursi

The Egyptian Front indicts Judge Mohamed Shereen Fahmi for the death of former President Mohamed Mursi during his trial, basing on his constructive malice which endangers the lives of the defendants in cases he adjudicated through his intransigence with the defendants’ rights, adding to that his inclination to place them in conditions that would naturally lead to their health deterioration. The Egyptian Front also condemns the recent decision by the Egyptian authorities to establish an independent department for terrorism and political violence, headed by this judge, which counts as a greenlight for all these arbitrary actions against defendants in such cases.

Constructive Malice is defined, according to Juristic scholar Ahmed Fathy Serour, as a form of general criminal intent by anticipating death as a possible consequence of a combination of acts. Although he did not want to achieve this result, he accepted its occurrence, which was realized here in the slow killing of Mursi, through his intransigence in responding to the former president’s complaints about his health conditions, and yet speeding up the trial procedures; making it on a daily basis at the expense of Mursi’s health, as well as not allowing him emergency aid after falling unconscious.

There are three focal points on which the Egyptian Front bases its incrimination of Shereen Fahmy, President of the 11th Chamber of the Cairo Criminal Court, in the involvement of the slow killing of Mohamed Mursi during his trial; the first pont is that since the begining of the trial three years ago of Mursi and other Muslim Brotherhood readers involved in media cases known as intelligence with Hamas and breaking into the eastern border, Fahmi did not respond to their requests, especially Mursi’s to improve the health conditions of his imprisonment and he also refused to send a specialized committee for medical examination. Mursi had complained about the deterioration of his health inside the prison, because of the administration’s intransigence in introducing treatment and running needed tests for the former president, who was a diabetic, which led to severe complications, including a coma in which he fell unconscious during his trial before Fahmy more than a year ago, not to mention that he was placed in a cage in isolation from the rest of the defendants during the hearings, preventing him from hearing or seeing anyone except for the judge, which reflected complete isolation, despite the presence of a door connecting the detainees in the courtroom. As for the other defendants in these two cases, which Fahmi ruled over, they suffered from poor conditions of detention, they are prohibited from visits and exercise, as well as  the failure to provide them with necessary treatment. This is a vast contradiction to the good treatment of  former President Hosni Mubarak during his testimony in the case of storming the eastern border

The second focal point in his responsibility for Mursi’s death and endangering the life and health of the other defendants is based on the acceleration of the trial process by holding the trial sessions four months ago, on a daily basis, for 6 days a week in three cases: namely, intelligence with Hamas, breaking into the Eastern Border, the Brotherhood’s guidance office. All of which are cases that many of the defendants are involved in, causing a great burden on the defendants and leading to their exhaustion, especially the elderly, who must attend the hearings daily, as well as on their lawyers who did not have enough time to present defenses. The most prominent evidence of Fahmy’s insistence on speeding up the trial proceedings is that following the adjournment of the trial sessions for five days due to the absence of one of the defendants in the case (Rashad Bayoumi) because of his illness and his presence in the prison hospital, but upon his return he immediately resumed the sessions on a daily basis starting June 16 one day before Mursi’s death. And on June 17, the same day Mursi’s death, before his pleading, he requested speech from Saad al-Katatni and Safwat Hijazi; they complained about the sessions being held on a daily basis, and demanded that the court hearings be held on a weekly basis, which the court ignored.

Although the trial sessions and the renewal of imprisonment at the Tora Courts Complex were completely suspended from 20 June to 19 July 2019 due to the Interior Ministry’s  inability to transfer the defendants by reason of securing the African Cup,Fahmi requested the continuation of his hearings. On 29 June, defendant Essam El-Erian filed a petition demanding that the hearings do not take place on a daily basis. He stated that this daily session negatively affects the health of the defendants, many of whom are over 60 or 70 years of age. In addition to their deprivation from food as they are not in prison during the distribution of meals, as well as depriving them from their right to movement and access to clean air, which can not be obtained while sitting for long periods in court, and as usual of requests made to Fahmi, this request was met with disregard.

As for the third focal point of Fahmi’s indictment, it is based on the  court’s failure to act responsibly towards Mursi’s falling unconscious in his dock on June 17, 2019, according to lawyers, more than one of the defendants tried to cross to Mursi’s side of the dock through the door separating the detainees in order to provide him first aid, as some of them are medical professionals, but the court’s security staff refused to allow them, citing instructions that no defendant should contact Mursi. Mursi was left for about half an hour before a doctor arrived to examine him. According to Essam El-Erian’s speech at the June 29 trial hearing, he stated that the court had been intransigent on Morsi’s medical rescue. He said his health status required a quick intervention to save him from death, through massaging his chest and heart area, and reviving his heart with an electric stun, which did not happen. The court did not even allow the present defendants with the opportunity to help, despite the exceptional situation..

The Egyptian authorities should have opened a direct investigation into the circumstances of Mohamed Mursi’s death with thorough authentication of reasons behind his sudden death as well as the deterioration of his health, which can be attributed as a shared responsibility between the court headed by Shereen Fahmy  and the prison administration, as mentioned above.Therefore, Fahmy should be held accountable for ignoring /delaying the consideration of requests submitted by the defendants in his cases, which he rules over on the violations they are subjected to, and  continuously fails to assign the Public Prosecution to investigate them.

However, the authorities decided to reward him in July 2019 by making him president of the newly established criminal department, affiliated to the Appeals Court, that will be assigned all administrative and technical work related to the prosecution of terrorism cases. A matter that reveals the desire of the current authority to strengthen this approach in the administration of the Judicial authority, especially in cases involving political violence, which portends an increase in violations against the accused and endangering life as well as putting the health statuses of many defendants at great risk.

The Egyptian Front demands that the authorities hold Judge Mohamed Shereen Fahmi accountable for violating the law through his arbitrarily actions against the defendants’ rights which are guaranteed by the Constitution and international conventions, instead of rewarding him and promoting him administratively. The Egyptian Front holds Fahmi responsible for the death of Mursi, which was preceded by that of former leader Mohamed Mahdi Akef, and his intransigence in allowing them improved conditions of detention and trials. His political attitudes towards the opponents of the current regime whether they were secular or islamists, which is evidenced by his harsh judgments and its wording which reveals a political doctrine similar to the official version of the state, especially towards the events that followed the January 2011 revolution, in complete discrepancy to the principle of judicial impartiality.