Egyptian Front monitored the death penalty in Egypt during the first half of 2020. It appears that Egyptian authorities insist on using the death penalty in criminal offenses and are widely using it in political cases. This in addition to violations committed against the defendants in these cases during their trial period and thus infringing their right to a fair trial.

During the first half of 2020, Civil and Military Criminal courts issued 171 death sentences, most of which are criminal cases. Also, the Cassation Court upheld sentences on 10 defendants in 3 cases, most of which are political. Meanwhile, Egyptian authorities executed 34 persons in 11 cases, 3 of which include events of political violence.

The death penalty in Egypt is problematic as it is widely used in various crimes not only in heavy ones. Also, the defendants are mostly deprived of their right to a fair trial due to the grave violations of standards of a fair trial.

The Death penalty situation during the first half of 2020

First:  Execution of the death penalty.

While Egyptian Front assures it stands against terrorism and does not by any means claim the innocence of any of the aforementioned defendants, it however emphasizes the importance of maintaining fair trial standards for everyone without discrimination. It has appeared that a number of defendants were subjected to enforced disappearances, physical and mental coercion, and the investigation sources were kept unknown. This reveals clear violations to fair trial standards in cases of capital punishment.

An infographic showing the executions during the first half of 2020 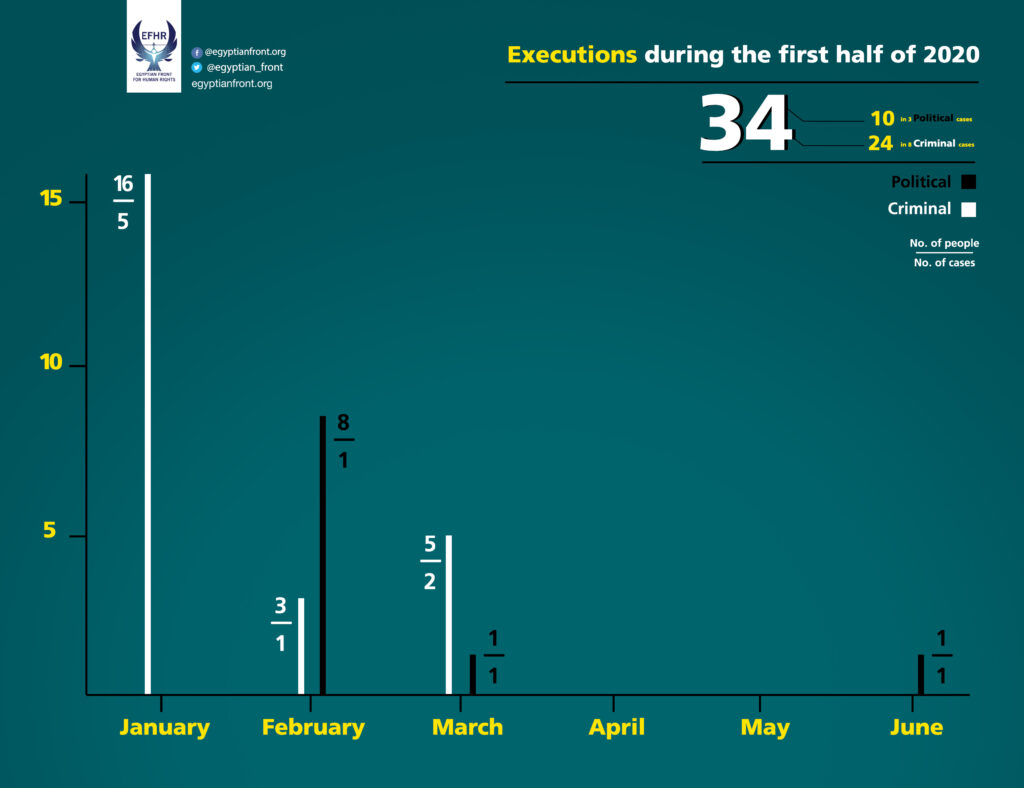 Egyptian Front monitored death sentences handed down to more than 171 defendants in 73 cases, 40 of whom are part of two political cases; Ansar Beit al Maqdis and Assassination Attempt of Alexandria’s Security Chief cases. Worthy to note that the latter is an emergency state security case where once a verdict is issued from an Emergency state security court it cannot be appealed. Also, 131 defendants were sentenced to death in 71 criminal cases.

Fourth: Referrals to the Grand Mufti

Egyptian courts referred more than 158 defendants in 59 cases to the Grand Mufti to get his advisory religious opinion on their death sentences. 40 of these defendants are part of political cases known as Ansar Beit al Maqdis and Attempted assassination of Alexandria’s security chief.

Suspended Executions: Violations of the rights of defendants pending execution in cases of political violence (2013 – 2020)